City, southwestern Turkey, near the Menderes River (the ancient Maeander). It is an important trading center on the Afyon-Izmir highway and rail line. Nearby is the site of ancient Tralles, said to have been founded by the Argives. Aydin was called Güzelhisar ("Beautiful Castle") under the Turkmen Mentese emirs in the 13th century. Renamed for the 14th-century ruling dynasty of Aydin, it was annexed to the Ottoman Empire about 1390. Timur (Tamerlane), who conquered it in 1402, reestablished the principality of Aydin; but it was soon recaptured by the Ottomans. The city was heavily damaged in September 1922 when the retreating Greeks set it afire as a final gesture before they surrendered to the Turkish nationalists. The city's historical buildings include mosques and a theological school. A Roman gymnasium (4th century BC), a marble column, and the theatre are the only remains of Tralles. Pop. (1990) 107,011.

The Menderes Valley, formed by the Menderes (Meander) river has been the cradle of many civilizations. This region offers a variety of beauties all at once. Lake Camici (Bafa) is a secret camping spot, hidden amidst the pines, olives and oleanders facing the five peaks of the Besparmak Mountains on the eastern slopes on which are the ruins of Alinda. The ruins of the ancient city of Heraklia are closer to the lake giving campers by the lake the chance to the sightseeing.

This fertile valley has sheltered many important cities of past civilizations the remains of which still preserve their grandeur  and dignity.

Aphrodisias
An antique city situated near the Karacasu-Aydın province, was established in the name of Goddess Aphrodite. It continued to be a great center of inbatiance from the Bronze Age to the Byzantine Preiod (2800 B.C. - 220 A.D.). During excavations, the Aphrodite Temple, Odeon, Statium and agora, and the city baths have been revaled. Aphrodisias was well known during the Early Age as a center of sculpture. The Aphrodisias Stadium is one of the best preserved stadiums among the antique city stadiums in Anatolia.

A lovely town, a popular port, and at the same time, an attractive holiday resort, is this "Bird Island" taking its name from the little "Dove Island" in the harbor. Facing this islet covered with flowers, Kusadasi stands on the beautiful shores of Aegean Sea, overlooking a bay of real fascination.

The pretty beaches along the deep blue sea will be the first to tempt newcomers with their scenic view under the glittering sun. When wandering through the town, one will be pleased a second time, by the modernity and high quality of the numerous accommodation establishments and related with their many facilities.

The large marina here is a favorite place of yachtsmen, with its complete services, and it is a colorful site to visit, being also a good shopping area. The famous ancient cities near Kusadasi, like Ephesus, Miletos and Priene, Didyma make the district interesting for sightseers, together with the historical remains like the old fortress and caravansary inside the town. The Dilek National Park, which is a wildlife preserve and a heaven for many species is worth seeing.

All of these charming spots complete the picturesque appearance of this town; Kusadasi today constitutes a perfect resort for every type of vacation at any time.

A glorious city from the earliest times, is Miletos, an lonian site standing over the Aegean coast.

Founded in the 10th century BC, this city had been an important commercial center influencing trade on the Mediterranean, with its two separate ports. Besides its economic prosperity, this ancient place was a point of flourishing culture as being the homeland of numerous philosophers and sages. Thales, Anaksymandros, Anaksymens and Hekotios are some of these philosophers.

Reflecting this history of splendor are several ruins dispersed over the region, the antique theater being the most important one. It is a beautiful sight, with its 15,000 seats inside, and also is an appropriate spot to view the entire land, by climbing to its upper terraces.

Another structure is the Faustina baths built by the Roman Emperor Aurelius for his wife, with a small museum nearby housing archeological finds from Miletos.

Priene used to be the most important port of the lonian Federation, connecting the city to the rest of the world. The site is particularly remarkable since the system of geometric planning was introduced here by Hippodamos of Miletos in the 4th-century BC. The perfect planning of the city can be recognized even today. The acropolis of the city is from the Hellenistic Period. You will also the see well-preserved agora, bulenterion, stadium and gymnasium, and the temples of Demeter, Athena, and Cybele in Priene. 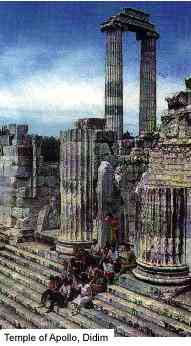 Didyma was one of the luckiest settlements of antiquity since it sheltered one of the most sacred spots of those times. It is the temple of Apollo, still standing in Didyma with its impressive view, though it has been attacked and burned several times. Here can be seen a portico of double colonnades surrounding the colossal temple and also the famous Medusa bust among the statues decorating it. The elaborate beauty of the temple and the artistic architecture captures you at once.

The temple was the oracles center (during the reign of Ionian Federation), and those who wanted to learn about the future visited Didyma then. The name of the city comes from this characteristic, as Didymeion means in antiquity, the place where oracles are told.

The only monument Didim possesses today, is the temple of Apollo, but it is reason enough to take an excursion to Didim where you may also enjoy the beaches while staying at friendly guest houses.

It is 12 kms northeast of the town of Karacasu. The history of this ancient city goes back to 4000 BC but the major part of Aphrodisias was built in the 1st-century BC. It was constructed to pay homage to Aphrodite, the goddess of love and fertility, whom it takes its name from.

Inside the high city walls, stand beautiful buildings covered by white and blue-gray marbles. The artistic style of the carvings on the monuments were so magnificent that the city soon became the master of arts, and its fame reached all sides of the ancient world. It constituted the greatest center of sculpturing, with its "School of Sculpture" the marvelous works of which are now displayed at the nearby museum.

An impressive sight in this city is the Aphrodisian theatre dating to the Hellenistic period. The lovely Aphrodisias odeion is another, being one of the excellent constructions in the area.

The Temple of Aphrodite is the most prominent remains with its high columns stand erected. One of the best-preserved stadiums in the world is also here, later used as an arena for gladiators.