The town, which is roughly 40 miles from the city of Adiyaman, has a total population of

21,391. Of these 8,033 live in the central town. The town itself is about 4,000 feet above sea level with forestry and animal husbandry its most significant economic activities. Celikhan is also famous for its honey, tobacco and beans.

Celikhan Icmesi:  These Healing waters are 23 km southeast of Celikhan. Containing carbon dioxide, bicarbonate, sulfur, magnesium and sodium it is helpful in the  cures stomach intestinal, liver and bladder disorders along with kidney stones, gout, overweight problems and diabetes.

Abdulvahap Lake:   This lake, situated in the northwest of Celikhan province in the midst lovely, resembles a crater lake.  Hunting is a favorite sports in the marshes and swamps around the lake. 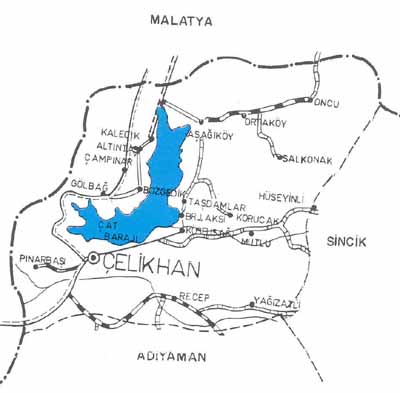