City, north-central Turkey. It lies on the edge of a fertile plain. A historic town on  old trade routes from central Anatolia to the Black Sea coast, Çorum became famous for its hand-spinning and weaving cottage industries, the manufacture of copper utensils, and its leather products. It is also the main trading centre for the surrounding plain; the plain, watered by the Kizil River (the ancient Halys), produces cereals, fruits, tobacco, and sugar beets. The city has a 13th-century mosque and several Ottoman structures. Pop. (1980) 75,726; (1990) 116,810.

Corum, 242 kms from Ankara is the right spot for those who are fond of history and archaeology. It is situated in an important

area, which combines the two geographical regions of Black Sea and Central Anatolia, and which hosted the earliest civilizations that left their signs all around. 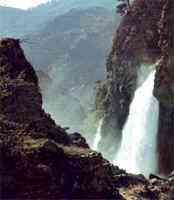 The remarkable specialty of the district is that it was one of the main settlement centers of the early Hittite era. Sites like Hattusas at Bogazkale, Yazilikaya and Alacahoyuk at Alaca town, which were important residences of those times, are to be found in the province of Corum, with their remains from the gorgeous ages of the Hittites.

From the more recent periods, the towns skills, Osmancik and Sungurlu in the environs of the city, offer beautiful architectural works. The 13th- century Ulu Mosque built by the Seljuks, is one example, while the 19th- century clock tower constitutes another attractive monument.

Corum today is a lovely and modern province with rich natural, cultural and economic resources. Of particular interest, is the fineness of the chickpeas found here, and the region is famed for the delicious roasted chickpeas.

Alacahoyuk, 36 kms from Bogazkale, is an important place of the Hittite era. Before the Hittites, the Hattion -a Bronze Age culture- dominated in this district and the finds of gold and bronze objects from this period are sheltered now in the Museum of Anatolian Civilizations in Ankara. The Hittite gateway is the most fascinating part of the city which is flanked by two sphinxes and furnished with Hittite bas reliefs. The Museum in Alacahoyuk houses the finds of the Hittite period.

Although the province of Corum is in the Black Sea Region, Bogazkale, one of its town, is in the Central Anatolian Region. It is the

center of the ancient Hittite region and is protected now as a national park. The ruins of Hattusas are memorable for their location and antiquity. The Great Temple of the storm god Tesup, and the fortress are remarkable. The city was the religious center of the Hittites and since there were many temples here, it was known as the city of Temples. Hattusas is surrounded by double walls and there are three gates, the Royal Gate, the Lions Gate and an underground tunnel, Yerkapi. In the acropolis you will see examples of the Hittite artisan, the Imperial Palace and government buildings.

2 kms from Bogazkale, is the ancient site of Yazilikaya, the name of which means "Inscribed Rock", and it is a fascinating place sure to be visited.

Being the most famous of the Hittite rock monuments, Yazilikaya is made up of two galleries, in front of which lies an interesting

open-air pantheon. Fine reliefs of Hittite gods and goddesses adorn the walls, carved into the native rock, dating back to the 13th century BC. The names of the gods are inscribed in hieroglyphics over their heads, and a relief of a Hittite king, dressed as a priest, is of particular interest among well-preserved ruins.