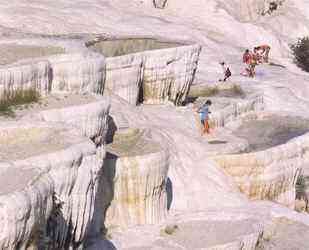 City, southwestern Turkey. It lies near a tributary of the Menderes River. Set among the gardens at the foot of Mount Gökbel (7,572 feet [2,308 m]), Denizli inherited the economic position of ancient Laodicea ad Lycum, 4 miles (6 km) away, when that town was deserted during wars between the Byzantines and the Seljuq Turks in the 12th century. By the 14th century, as Lâdik (Ladiq), Denizli had emerged as an important Turkish town noted for its woven and embroidered products and its luxuriant gardens. It was ravaged by earthquakes in the 18th and 19th centuries.

In the surrounding agricultural area the cultivation of cotton, cereals, figs, and tobacco, along with livestock raising, are the principal activities. North of Denizli is Pamukkale (ancient Hierapolis), a resort around which limestone deposits from the hot springs have formed beautiful cascades and basins. Denizli is linked by a branch line to the Dinar-Izmir railway. Pop. (1985) 169,130; (1990) 204,118. 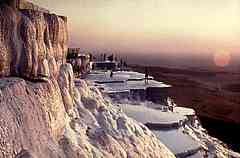 A magical and spectacular natural site, unique in the world, Pamukkale (Hierapolis) is a fairyland of dazzling white, petrified castles. Thermal spring waters laden with calcareous salts running off the plateau's edge have created this fantastic formation of stalactites, cataracts and basins. The hot springs have been used since Roman times for their therapeutic powers. Both the thermal center with its motels and thermal pools, and the ruins of the ancient city of Hierapolis, are situated on the plateau.

Pamukkale (Hierapolis) is now covered by a comprehensive protection and construction plan and needed restoration work has already begun.

An agreement ratified in Barcelona on February 16, 1976 in regard to the "Prevention of Pollution in the Mediterranean" and a 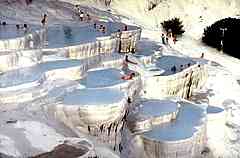 Protocol relevant to special areas of protection have all gone into effect. Within the framework of this protocol the following have been designated as special protection areas:

Furthermore, in accord with the same agreement, 100 sites along the shores of the Mediterranean sea which share a common importance, and seventeen other sites around the country have come under protection. Work is being undertaken at an international level. The seventeen sites are as follows:

An agreement on the Protection of the European Archaeological Heritage has also been signed.

An agreement signed between Turkey and the Council of Europe countries on the protection of the European architectural heritage has been ratified by Law 3534 and brought into effect.

Situated in the inner part of the Aegean Region, is Denizli, a tourism city with its numerous beauty.

Dating back to the Calcholithic age, this was the site of a settlement of the earliest communities, and changed hands 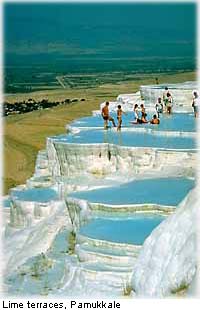 continuously, becoming the center of various civilizations in different time periods. The ancient city of Laodikeia is here, within the borders of Denizli, with its ruins awaiting for the sightseers. In addition to Triopolis which was known as the center of bishops, while Christianity spread. Hierapolis is another Ancient City, being a historical treasure, while it also offers a real wonder of nature. Named, as today "Pamukkale", this place is astonishingly beautiful, and unique in the world with its white travertine offering marvelous scenery.

The wide forests and numerous picnicking and camping areas here contribute to this natural and archaeological richness, while its position as a stopover between the major provinces like Izmir, Ankara and Antalya, increases the tourist attraction of Denizli. The thermal resorts also attract visitors to the provinces with their spring waters of therapeutic effects Gemezli, Cezmeli, Tekke and Kizildere are the main spa resorts, besides the thermal centers of Pamukkale and Karahayit.

A miraculous site, unique and world famous for its fascinating formation of white petrified cascades is Pamukkale located 20 kms from Denizli.

This fairyland of "Cotton Castle" is a marvelous spectacle, created by a beautiful composition of cataracts, pools and stalactites. The grounds of white travertine gleam under the sun, as the waters flow mildly over. 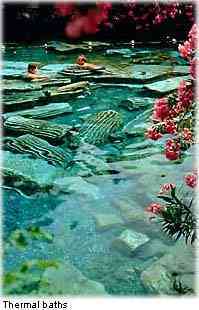 Nearby is the ancient "Hierapolis" (the Holy City). Here stands a magnificent theater affording a wonderful view of the land below, and the Temple of Apollo, representing the Hellenistic period.

Since the earliest times of history, Pamukkale has been chosen for its therapeutic mineral waters. The site today is a fine spa-center with its warm pools and numerous facilities provided nearby.

To the northwest of Pamukkale, is Karahayit, another thermal center with curative waters of a high iron content. The specialty of this site is the interesting formation made by the water, with the most beautiful tones of glittering red. You will want to make this extraordinary scene eternal by taking some photographs, and the originality of the region is reflected on these photos.

Standing since the 3rd century AD, there exist aqueducts between Pamukkale and Karahayit a rendering an attractive place for sightseers, while thermal baths and camping grounds are also provided for all holiday makers.