Erzurum is the largest province in Eastern Anatolia and is located on a high plateau (1950 m). The province has always been a transportation junction and is now the transfer point for air, rail or bus connections for travelers coming to eastern Turkey.

The history of the city extends back to 4000 BC and it has seen many civilizations. One of the important remains from this periods is the well preserved Byzantine city walls. Most of the historical finds are kept in the collections of the Archaeological Museum, which is a part of the

The modern city, with wide tree lined boulevards and university buildings, is intertwined with the historical district. The Seljuk buildings in the town are remarkable. The Ulu Mosque built in 1179 is interesting, with its many columns and seven wide naves. Next door to Ulu Mosque is the Cifte Minareli Medresse, which is the most famous feature of the city. It is a perfect example of Seljuk architecture, the carved portal being particularly fine. Walking south you will see the Three Tombs (Uc Kumbetler). Another interesting tomb is the elegant 13th- century Hatuniye Tomb. The Yakutiye Medresse of the 13th- century is one of the most important historical monuments of Erzurum with its beautiful portal and richly tiled minaret. Here is an elaborate mosque built by the great architect Sinan in the 16th- century, the Lala Mustafa Pasa Mosque. The Aziziye monument commemorating the Turkish - Russian War, the citadel and Bell Tower, the Rustem Pasa Caravanserai and the Bedesten are other historical places of interest. 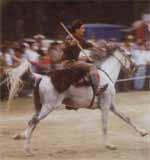 Erzurum has a specific local black stone which is used for jewelry or, the like which you may see while wandering around, especially in Tashan.

For nature lovers Lake Tortum, 120 kms from Erzurum, and Mount Palandoken provide perfect opportunities. Palandoken winter sports resort which is reached by mountain roads of scenic beauty. Only 6 kms from Erzurum, this winter sports spot is competitive with those of Europe. By Lake Tortum you will encounter a rarely found beauty of a peaceful lake. The waterfalls at the northern end of the lake are worth seeing as they plunge from a height of 47 m. Erzurum is a very province suitable for mountaineering with peaks of 3000 m, and also has many hot springs and

City, eastern Turkey. It lies 6,400 feet (1,950 m) above sea level in a fertile plain surrounded by high mountains. On a caravan route from Anatolia to Iran, Erzurum has been a major commercial and military centre since antiquity and is now a major rail station on the route between Ankara and Iran.

Although its foundation was probably much earlier, Erzurum achieved real importance as Theodosiopolis, a 5th-century-AD Byzantine fortress that fell to the Arabs in 653. Thereafter it was disputed among the Byzantines, Arabs, and Armenians until taken by the Seljuq Turks in 1071; it prospered in the early 13th century under Seljuq sultans. The Arabs and the Turks called it Arzan ar-Rum, or Arz ar-Rum ("Land of the Romans"), from which its present name is derived. It came under Ottoman control in 1515. The city was occupied by Russian forces in 1829, 1878, and 1916-18. It was in Erzurum, in July 1919, that Mustafa Kemal (later Atatürk) presided over the first Turkish nationalist congress, leading to the establishment of the Turkish Republic.

Historically important buildings include Seljuq theological colleges (1253 and 1308), the Great Mosque (12th century), and royal mausoleums (12th and 13th centuries). There is a local archaeological museum. Erzurum is the seat of Atatürk University (1957). It is important as a centre for trade in livestock, but it has little industry other than a sugar-beet factory; local craftsmen still excel in metalwork and saddlery. The city has Kurdish population too.

The surrounding region is drained by the Karasu River, a headstream of the Euphrates, and the Aras and Çoruh rivers. Agricultural products include wheat, barley, millet, sugar beets, and vegetables. Pop. (1985) 246,053.