In the center of the city stands the Gaziantep Fortress and the Ravanda citadel as the reminders of past. The Archaeological Museum, with its important collections from neolithic and the Hittite ages as well as the Roman and Commagene times, attracts many visitors. The surroundings of the city are also full of valuable Hittite remains. The Suzer House, which has been restored to its original beauty, now houses the Ethnographical Museum. The Yesemek Sculpture Workshop, 30 kms south of the town of Islahiye, is one of the world's first of this kind. Some of the other historical remains are the Belkis, and Kargamis Ruins by the town of Nizip. Dulluk which is close to the city center is ideal for those who would like to rest in a natural setting amidst forest and has camping facilities.

Gaziantep is famous for its three regional specialties. First is the copper-ware products you will not want to pass up. The delicious lahmacun (a kind of pizza) is the second, while the third is the sweet pastry baklava, which Gaziantep makes the best in the world.

City, south-central Turkey. It is situated near the Sacirsuyu, a tributary of the Euphrates, in limestone hills north of Aleppo, Syria.

The city was strategically situated near ancient trade routes, and recent excavations have unearthed fragments of pottery 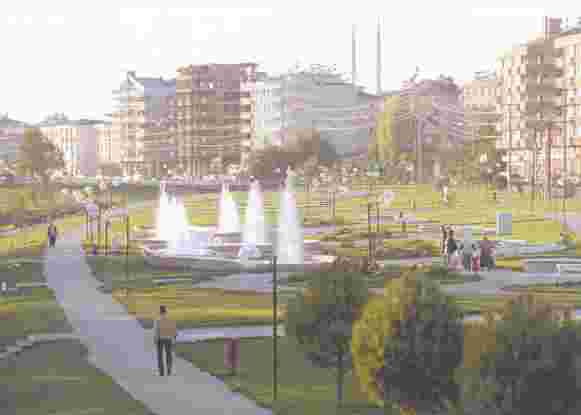 indicating settlement there in the early 4th millennium BC. Known as Hamtap in the Middle Ages, the city was an important stronghold guarding the Syrian routes and was captured by Turks in 1183. Thereafter it changed hands among various Turkmen and Arab dynasties and Mongol and Timurid invaders until its final absorption into the Ottoman Empire in the early 16th century. Called Ayintab (Arabic 'Ayntab: "Good Spring") under the Ottomans, it was occupied by the British in 1919 and by the French until 1921. By then it had become a centre of Turkish nationalist resistance to European occupation. Upon its return to Turkey in 1922, Mustafa Kemal (later called Atatürk), founder of the republic, renamed it in honour of its heroic stand (Turkish gazi, "champion of Islam"). Well-built, with stone houses, paved streets, and covered bazaars, Gaziantep is bordered by gardens, vineyards, and olive and nut groves.

Historical buildings include the ruined fortress built by the Byzantine emperor Justinian I (6th century AD) and mosques dating from the 11th and 16th centuries. A medieval theological college houses an archaeological museum that has an outstanding collection of Hittite seals unearthed in the region.

The surrounding area is delimited on the south by Syria and on the east by the Euphrates River. It is noted for its production of wines, halvahs and baklava (sweets), and pekmez (grape preserve); other products include pistachio nuts, aniseed, tobacco, and goatskin rugs. A region settled since antiquity, it includes the ancient sites of Duluk (ancient Doliche; site of the shrine of Jupiter Dolichenus); Kilis (the Assyrian Kilisi); and the neo-Hittite city of Samal (Zincirli Höyük; q.v.). Pop. (1985 prelim.) city, 466,302.

Gaziantep ,the biggest city in the southeast of Turkey and the sixth biggest one in Turkey, is one of the first settlements in Anatolia.

Ruins which belong to the Stone Age, Calcoholitic , Copper age, Hittite, Mitani, Assyrian, Roman and Byzantine, Islam and Turkish - Islamic Period can be traced everywhere in the area .

The region was under the Hittite control in the 1700s BC. The ancient city of Duluk, which is in the north of the city today, was an important religious center of the Hittites. During the period of Caliph Omar as a result of the wars to spread the Islam out of the Arab Peninsula, the Moslem troops who defeated the Byzantine Army at Yermuk in 636 under the command of lyaz Bin Ganern captured the area. As a result the people admitted Islam and Omeriye Mosque was built in this period as a symbol of the conquest. After the .Manzikert victory in 1071, Suleiman Shah conquered Antep and surroundings in 1084 and annexed the area to the Seljuk Empire. On August 20,1516 Yavuz Sultan Selim Khan came to Antep and stayed here for three days. After Mercidabik Victory against Memaluks in 1516 the city came under the reign of the Ottoman Empire.

Turkish Grand National Assembly granted Antep the "GAZi" title on Pebruary 8, 1921 because of this achievement.

Gaziantep, which was called Ayintap, Antep, Kala-i Pusus, and Hantap, got its name from the depth of the history and the title from the Independence War with full of heroism. 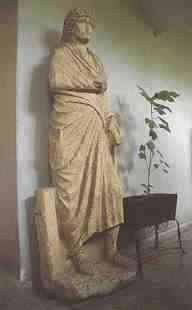 (Asia Minor) culture somewhere between east-west, situated on military and trade routes as well as being a crossroads, in today's Turkish Geopolitical make-up is still an important factor. For this reason, almost all cultures from the historic ages have influenced the Gaziantep district which has more than 250 mounds, which were first formed in the Neolitic age by the collective gathering of items from settlements reflecting culture and architectural advancement levels with each level belonging to a town, village or settiement. The oldest Anatolian findings attributed to man were some stone tools found in the DQllik Paleolitic cave, dated 600 thousand years ago, in the mid-Paleolitic age cultural life, especially from the Bronze age, Gaziantep and its environs shows signs of being a bustling settlement. This region was active in the Hum, Hitite Empire, Late Hitites, Assyrian, Persian, Hellenistic and Roman periods. Along with the Byzantians and Islamic periods, the Crusades of the Middle Ages brought new geopolitical forces and made Gaeiantep the scene for many historic events. The Gaziantep Museum has had more than 35 working sites for joint efforts and rescue digs, as well as scientific digs with all artifacts now located in the museum. In 1998 the Director of Museums sponsored 11 archeological digs usually with the assistance of the Gaziantep Museum and a total of 64 thousand 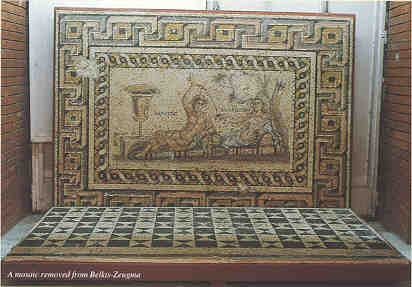 The Gaziantep Director of Museum is responsible for the Archeological Museum, Etnographical Museum and the lslahiye Yesernek Open Air Museum. The Director of Museums is also responsible for 693
immovable (parmanent) culture location and 221 archeological site areas. In 1944 Sabahat Göğuş gathered artifacts from here and there to establish the uaziantep Museum. First housed in the Nuri Mehmet Pasha Mosque, they were brought to this building in
1969. In a short time the museum needed to be enlarged due to the richness of the archeological potential of this location. 1976 saw the start of an additional ha!! and after standig half-completed for a lono time. it was finished and increased the museum
space greatly. The buiiding today has 5 exhibition halls that remain humble beside the exhibits presented from f all the afore-mentioned sites.

The Gaziantep Museum while trying to break I out of image as an historical depot and awake visitor sympathy tried to target new exhibitions. 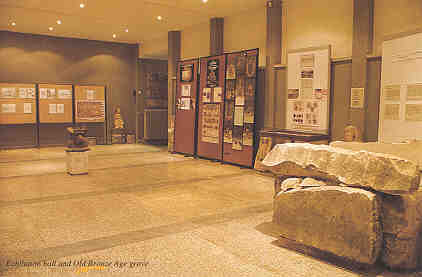 A. Temporary Exhibits and Nostalgic Displays

The long narrow hall at the entrance is usually used for temporary or periodic exhibits that change regularly. To attract those individuals who like pictures and chacterizations, a characterization exhibit, entitled
'Archeology' was held.

In this hall, Anatolian and Gaziantep's antique settlement locations and excavation centers are displayed on large panel maps for knowledge and there is also a chronology of Gaziantep's 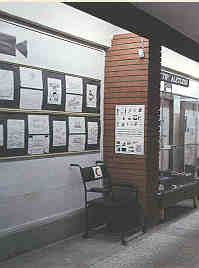 district. The first is of the natural history, especially the DillUk and Euphrates paleolittc stone tools, the techniques for their usage, didactic materials continue the display. Various CalcolMc and Bronze Age stages are displayed. The Iron Age and its shining example of civilizalion, the Urarians, are the last display. The second section contains, Acamedian-Persian, Hellenistic and Koffimagene with special Roman age artifacts placed in the display. The next section displays the decorated cups and various oil lamps of the Byzanliunti and Islamic periods bring this exhibit to a close. Also located in this hall is the Belkis-Zeugma Excavation 'Findings and Childhoods Toys of the Ages' display. There are also the bones of a mammoth and a stuffed crocodile on display.

Another long narrow hall displays the findings of the Belkis excavations 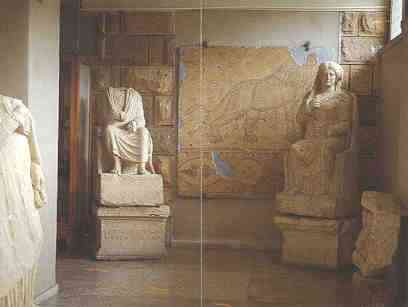 on-hand and especially the carved gravestones and reliefs along with mosaic panels. (The 4th century A.D. graverooms with corridors and terraces with statues reliefs of the deceased are a special feature of the Zeugma necropolis.) Also displayed here was iliegally removed from our country in the '1960's by the United States of America.

Recently arranged according to modem museum standards, one side displays artifacts from all ages of bronze, there are the superstitous smail statuettes of people and animals, cult artifacts, figures, stamps and cylindrical signets, decorated needles, bracelets and tork's with fibula's, ring stones and classic-age hair signet presses with gold and silver ornamentattons. The other side holds the coins according to their pressage (minting) and period with notes about each period and special coins on the panels. The displays on the side contain gold, silver, and bronze coins from Greek, Hellenistic, Roman, and Byzantium periods beside Ottoman ornaments for the visitor to admire.

In the corridor joining this hall with the BeltasZeugma Hall, on two antique wooden buffets is a collection of "Old Gaziantep Children's Toys" restored and donated to our museum by Mrs. Akten Koyluoglu

This hall, again a first for our country's museums, displays a 60 panel panorama of "The founding of a Roman Period City' with a drawing exhibition area. •Turkish Architectural Works' and 'Archeologic Cultural Wealth' with 'Plundered Anatolia' were large photographic panels originalli/ sponsored by the Cultural Ministry and sent for display in many foreign countries, we have on display their reduced size copies. The Museum Director's 1997-98 excavations in the dam area of an Old Bronze Age Necropolis uncovered 312 gravesites and many remains and artifacts were taken More than 34 thousand signet presses which were uncovered at the Belkis-Zeugma excavations, now a panels display documents and information on local treasures illegally taken out of the country and current 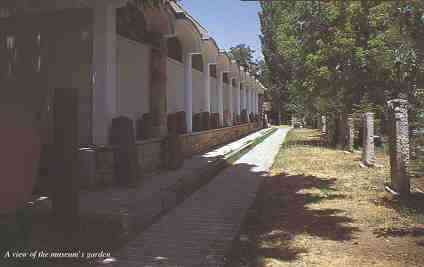 In the front garden are funeral banguet reliefs and markers of the Hitite and Late Hitite periods. The -side garden is mostly occupied by finds from the Roman period at Belkis-Zeugma with men represented as eagles and women by wool basket motifs on the grave displayed in the garden. New large rock and stone artifacts and mosaic panels will be displayed in the new building upon completion due to lack of current space.