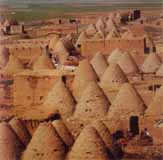 also spelled HARAN, Roman CARRHAE, ancient city of strategic importance, now a village, in southeastern Turkey. It lies along the Balikh River, 24 miles (38 km) southeast of Urfa. The town was located on the road that ran from Nineveh to Carchemish and was regarded as of considerable importance by the Assyrian kings. Its chief cult in Assyrian times was that of the moon god. It is frequently mentioned in the Bible; Abraham's family settled there when they left Ur of the Chaldeans (Genesis 11:31-32).

In Roman times, Carrhae was the scene of a disastrous defeat of the Roman governor Crassus by the Parthians (53 BC; see Carrhae, Battle of) and of a later defeat of the emperor Galerius by the Persian king Narses (AD 297). Pop. (1990 prelim.) 2,158.

The ruins of the Ulu Cami (mosque) in Harran. This 8th century center of worship and study in the Islamic world is one of the most impressive ruins in the area.

According to the Old Testament, Abraham resided here and his father Terah died here. Harran 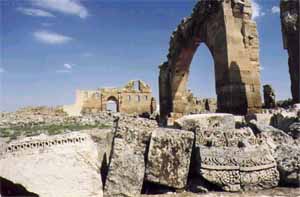 is known for its interesting cone and cubic shaped dwellings. They are made of clay and known to be naturally very suitable for the hot climate of the region. These mud-brick houses are up to 4-5 metres high and this height is considered to be the other reason for cool and confortable inside conditions. The present-day town of Harran is about 50Kms to the south of Sanli Urfa, a south-eastern province of Turkey.

According to the tradition, Abraham was moving from Ur to Canaan which was in Promised Land (Gen.11:35), when he rested in Harran. The town is surrounded by a city wall. Although the wall was restored in the 12th century A.D., only five of its 12 original gates have survived till today. The ancient settlement was on and around the hill in the center of the town. This part has not been excavated yet. On the way up the hill there are two doorposts with markers indicating that this place was "Aran's House" from which Abraham took Sarah.

Inscriptions indicate that Harran existed as early as 2000 B.C. The place is known to be one of the most important cult centers of that time. The temple of the moon-god Sin was here. Sin was one of the great gods of the Assurian-Babylonian pantheon. The roof of the temple was covered with cedar tree from Lebanon. During early periods Sin was represented with a long beard and a crescent above a horned tiara. This was transformed into a single crescent only during the following centuries. Worshipping Sin continued until 6th century A.D. in Harran.

Harran became the capital city to Assurians during the reign of king Assurbanipal in the 7th century B.C.

The Roman army led by Crassus in 53 B.C. was defeated by the Parthians in front of Harran and Crassus was killed.

In 217 A.D. (April 6th), Roman Emperor Marcus Aurelius Cracalla was murdered here while he was on his way from Temple of Sin to the palace. Sin was an important god of Romans.

A citadel was built in the 14th century in place of the Temple of Sin. This lies in the south-west quarter of the town.

The 8th century A.D. mosque called Great Mosque (Ulu Cami) which lies to the north slope of the hill. It dates back to

the Omayad period. The tombstones of the Babylonian king Nabouid were found in this mosque and are on exhibition in the museum of Urfa today.

The region has always been considered a very sipiritual ground by many cultures. The remains of the cult Holy Planet or Sabiers is only 60 Kms away from Harran. On an area with 1 Km radius there are various temples devoted to the cults of Sun, Moon, Jupiter, Venus, Saturn and Mercury. The Sabier cult maintained its existance until the 17th century A.D.