Formerly MERSINA, city and seaport, south-central Turkey. It lies along the Mediterranean Sea at the extreme western end of the Cilician Plain, 40 miles (65 km) west-southwest of Adana.

A town of recent origin, Mersin stands near the site of an unidentified ancient settlement. The ruins of the Roman harbour town of Soli-Pompeiopolis lie immediately to the west. Excavations in a mound called Yümük Tepesi, 2 miles (3 km) north of the modern harbour, indicate settlements in the remote Neolithic (New Stone Age) Period: a village was fortified there as early as c. 3600 BC and again during the Old Hittite (c. 1750-1460 BC) and New Hittite (c. 1460-1200 BC) empires but was abandoned after the foundation of Pompeiopolis.

Mersin's artificial harbour is an outlet for the agricultural products and minerals of the Cilician Plain and southeastern Anatolia. The site was chosen because of its silt-free location and its rail and road connections with the interior. A branch line links Mersin with Adana and the Istanbul-Baghdad railway. The port is connected by ferry to Cyprus. Mersin is the site of one of Turkey's largest oil refineries. Pop. (1980 prelim.) 216,308.

Mersin is one of the most modern provinces of the palmlined avenues, city park and modern 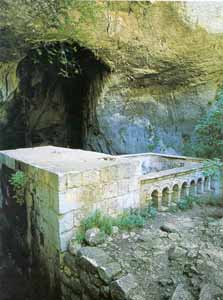 hotels region and a good base for visiting the nearby historical sites and beaches. Mersin which is the largest port on the Turkish Mediterranean. There is also free zone here. It is a business centre. In Mersin you may find all the comforts of a modern city and all the characteristics of the Mediterranean cities. Fish is as well as most delicious in this region and in the Mersin fish market you will find inexpensive fish restaurants which are really enjoyable for those who love fish and "Raki" or wine. Although Mersin dates only from the 19th century, it occupies an extremly ancient site. At Mount Yumuktepe the excavations proved that there had been twelve successive settlements beginning from the Neolithic Period.

Two hours west of Mersin, Anamur is a lovely town situated in the mountains and surrounded by banana plantations. There are the ruins of ancient Anemorium, 10 kms to the west of the town on a fine beach. Anamur Castle is well preserved and provides a fascinating view of the landscape. The road between Anamur and Silifke passes through the pineclad mountains which descend to the sea offering splendid views of cliffs, coves and the brilliant turquoise waters of the Mediterranean. Aydincik is a comely village with pleasant beaches. After Aydmclk, to the east, is the most beautiful coastline in Turkey.

Silifke, 90 kms from Mersin, is a little bit inland, on the site of the acropolis of ancient Selcucia and Colycadnos. The old bridge crossing the Goksu River, the theatre and the temple from Roman times are of interest.

To the north of Silifke there is an excellent excursion opportunity, to Uzuncaburc. The road up to the magnificent ancient site of Olba-Diocaeserela is lined with large tombs. In the ancient city there are the ruins of the Temple of Zeus, Olbius and the Temple of Tychaion, and numerous arches, theater, Byzantine church and tower.

Outside Silifke, on the road to Tasucu is the archeological museum, while further on AyaTekla is the tomb and church of St. Thecla who is the first female martyr.

Tasucu is a pleasant resort town with good accommodations and fine sandy beaches, especially the Aphrodite Beach. The harbour includes regular sea bus services to Girne in the Turkish Republic of Northern Cyprus. Between Silifke and Mersin there is the little 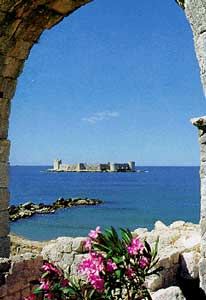 fishing village Narlikuyu which you should not pass by without tryirig the delicious fish by the turquoise bay In Narlikuyu you can see a Roman mosaic depicting the Three Graces. Around Narlikuyu an exciting excursion is to Cennet Cehennem, (Heaven and Hell), and the Astim Dilek Caves which are deep chasms, one of which has a chapel. They are really fascinating and you will understand why they carry these names once you visit.

60 kms from Mersin, to the west is the ancient city Korykos, which is now the resort town of Kizkalesi, with sandy beaches and camping sites. There are important remains which are symbols of that region like The Castle of Korykos on the beach faces the Kizkalesi (Maiden's Castle) which stands on an islet 200 m offshore. The two castles once used to be joined by a sea wall but now they are separated. The road from Silifke to Mersin is very enjoyable along the coast; the ancient basilicas, tombs and ruins are on one side of the road and lie beautiful coves with sandy beaches on the other. Ancient Pompeiopolis, founded by Rhodians in 700 BC, provides many remarkable ruins. The modern name of the city is Viransehir and it is 13 kms west of Mersin. At Kanlidivane you will see the ruins of the ancient city Kanytelis clinging on the sides of a deep chasm.

Tarsus is the birthplace of St. Paul. Situated on the edge of the fertile Cukurova plain in the city is middle of cedar groves. The city is also the meeting place of legendary loves Antony and Cleopatra, and there is the commemorative Cleopatra Gate. To reach St. Paul's Cistern you pass through narrow streets of the city; the old houses on the sides will prepare for the things you will see . Then you may head for a rest by the Tarsus watedalls and shady trees. The tombs of Prophet Daniel, Lokman Hekim, a famous legendary medical doctor, are here. There are also many historical places to visit like, Cleopatras Gate, the Gozlukule, Justinians Bridge, on the Tarsus Museum.