peaceful waters, one of the pretty cities in the Mediterranean region. Around 45% of Isparta consists of high plateaus. There are many impressive caves around Isparta.

If you go to Kirazildere or the environs of Sidre, you may view this lovely site with a bird's eye. Here is the Egirdir Lake which is one of the most fascinating of Turkey, extending calmly along wide forests covering the foot of the mountains behind. It is an excellent site for relaxing, while it also offers opportunities for sur and fishing. Some of other picnicking sites are Golcuk Lake (13 kms southwest from Isparta), Kirazildere, Ayazma, Milas, 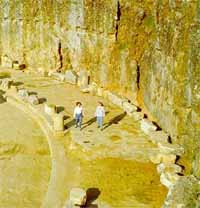 and Kasnak Forest, famous for various kinds of butted lies.

The town of the same name, is a rarely beautiful site not only because of the charming scene the lake provides, but also with the ancient ruins decorating the land. The Ulu Mosque of 15th century stands here with its attractive minaret, along with the Seljuk fortress and Byzantine churches. Antiocheia, the ancient city of Yalvac and ruins at Bayat are the other monuments of sightseers' interest.

The two national parks in Isparta are the Kovada and Kizildag, which please the visitors with their natural beauties and historical remains. The Kovada Lake is made up of bays and beaches, surrounded by forests, and possesses a fresh atmosphere just like the National Park of Klzildag full of thousands of nice cedar trees.

Changing hands continuosly throughout history, Isparta also holds many signs from earlier times. At the museum of the city, a rich collection of ancient coins, fine examples from Turkish folklore, several Roman relief and works of art from the Ottoman period are found. Firdevs Papa Mosque, Yilan Koran fountain and Kink minaret are also spectacular monuments, while Yalvac, and Sarkikaraagac, are two other sites with ancient roots. 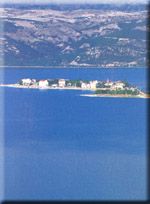 Turkey. Known as Baris under the Byzantine Empire, it was taken by the Seljuk Turks in 1203-04. Later it belonged to the Turkmen Hamid principality, the last ruler of which sold it to the Ottoman sultan about 1381. The city's monuments include a ruined medieval fortress and several mosques, of which Firdevs Pasa Cami is a work of the 16th-century master court architect Sinan. Isparta is known for its roses and attar (fragrant oil) of roses and for its carpets. A branch line connects it with the main Anatolian railway. Pop. (1985) 101,215.