Haydarpaşa (English: Haidar Pasha) is a neighborhood within the Üsküdar district on the Asian part of Istanbul, Turkey. The place, on the coast of Sea of Marmara, borders to Harem in the northwest and Kadiköy in the southeast. It is a historical area with almost solely public buildings.

Internationally known structures around the area are the Haydarpaşa Terminal, Port of Haydarpaşa and the Selimiye Barracks in adjecent Harem.

Following public structures, built in the 19th century or early 20th century during the Ottoman era, are found in Haydarpaşa: 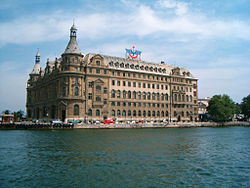 Istanbul Haydarpaşa is a terminus main station of the Turkish State Railways (TCDD) in Haydarpaşa close to Kadiköy at the Anatolian part of Istanbul, Turkey. International, domestic and regional trains running to east- and southbound destinations depart from this major terminal which was built as the terminus of the Istanbul-Baghdad and Istanbul-Damascus-Medina railways during the final years of the Ottoman Empire.

The first station there was built in 1872 when the railroad was opened to Gebze. However, as the line was extended, traffic increased and a new and larger building was needed. Its construction started in 1906 by Otto Ritter and Helmut Conu, two German architects who chose a neo-renaissance German style. They designed a large building, much in accordance with the ambitions of the German investors who were building the Istanbul-Baghdad Railway and undertaking the consultancy works for the Istanbul-Damascus-Medina Railway. Haydarpaşa was an important link in the railway chain of the Berlin-to-Baghdad railway scheme, part of the German Empire's strategic plans to gain control over the trade routes between the East and the West in the late 19th century by building a railway connection between Germany and the Persian Gulf, thus by-passing the Suez Canal. The station was put into service on August 19, 1908 and formally inaugurated on November 4, 1909.

Model of HPT at Miniatürk

The structure was built on 1100 wooden piles hammered into the seabed and is therefore surrounded by water on three sides, a unique feature for a railway station. The Teutonic pseudo-castle railway station was built between 1906 and 1908 by the Anatolia-Baghdad Corporation, and was a gift to Sultan Abdülhamid II from his ally Kaiser Wilhelm II. Its foundation is 1100 wooden piles, each 21 meters long, driven into the mushy shore by steam hammer. The station building has a very distinctive style, definitely standing out in Istanbul. Thanks to its location, it has been very well preserved, even restored following the damages caused by a burning tanker ship in 1979. The building is best seen from the sea, by taking a boat that calls just in front of the station to cross the Bosphorus.

There are tombs and monuments in the Haydarpaşa Cemetery near the military hospital, dedicated to the British and Commonwealth soldiers, who lost their lives during the Crimean War (1854-1856)and the two World Wars.

The northwest wing of the 19th century Selimiye Barracks, once housed the hospital, where nursing pioneer Florenkce Nightingale cared wounded and infected British soldiers, is turned into a museum exhibiting remains to honor her memory.

Port of Haydarpaşa at the north is one of the main container terminals of Turkey.