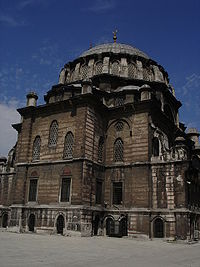 The Laleli Mosque was built by Sultan Mustafa III from 1760–1763, designed in the baroque style by Ottoman imperial architect Mehmet Tahir Ağa.

The complex was destroyed by a fire in 1783 shortly after its completion and was immediately rebuilt. A fire in 1911 destroyed the madrasa, and subsequent road construction work destroyed many other the auxiliary structures to the mosque.

The mosque was built on a high terrace over a complex of vaulted shops, whose rents were intended to financially support the mosque complex. Underneath the mosque structure itself is a great hall, supported by eight enormous pillars with a fountain in the center.

The mosque is oriented along a northwest-southeast axis, and has a rectangular courtyard about twice the size of the prayer hall to the northwest. This courtyard has a continuous arcade with eighteen domed bays and a ablution fountain in the center. The mosque itself has a brick and masonry base, with a masonry superstructure and octagonal drum supporting the dome. There are two minarets located at either end of the portico flanking the courtyard entrances.

The Laleli Mosque is an octagon inscribed within a rectangle, with a gallery on its western end. The walls make use of colorful variegated marbles in red, blue, yellow and browns, further decorated with medallions in opus sectile using also semi-precious onyx and jaspers. The mihrab and mimbar are likewise richly decorated with precious marbles. The interior is well-lit, with numerous windows in combinations of white and stained glass.

The dome is 12.50 meters in diameter and 24.50 meters high on an octagonal drum of eight arches, with semi-domes at the corner arches and larger semi-domes joining the arches above the mihrab and the central bay of the narthex.

Most of the structures of the Laleli Mosque kulliye have disappeared over the years, but octagonal domed turbe facing Ordu Street remains, and contains the graves of Mustafa III, his wife Mihrisah Sultan, son Selim III and daughters Hibetullah and Fatma Sultan and Mihrimah Sultan. The interior is decorated with İznik tiles, and a band of calligraphy encircles the upper walls.