Nusretiye Clock Tower, aka Tophane Clock Tower, is a clock tower situated in Tophane, a neighborhood in Beyoğlu district of İstanbul, Turkey next to Nusretiye Mosque and Tophane Kiosk at the European waterfront of Bosphorus. It was ordered by the Ottoman sultan Abdul Mejid I (1823-1861), and constructed by the renowned Armenian architect Garabet Amira Balyan in 1848.

Designed in neo-classical style, the four-sided, three-story clock tower is 15 m high. A tughra of Sultan Abdul Mejid I is put on above the entrance. The original clock and the clock face are in a state of disrepair. The clock tower along with Nusretiye Mosque and the Tophane Kiosk survived urban renewal and highway construction program mid 1950s. However, it remained within the customs warehouse area of İstanbul Port, cut off from the public access today.

The Kilic Ali Pasha Complex (Turkish: Kılıç Ali Paşa Külliyesi) is a group of buildings designed and built between 1580 and 1587 by Mimar Sinan, who at the time was in his 90s.

It is located in the Tophane district of Istanbul, Turkey. It is named after Kılıç Ali Paşa.

It consists of a mosque, a medrese, a hamam, a türbe, and a fountain. Originally, it had been on the coastline, but since the sea in front of it has been filled again, it is now surrounded by other buildings. The complex was built on the orders of the Kaptan-ı Derya (Chief Captain of the Ottoman Navy) Kılıç Ali Paşa. When the Paşa was told to build the complex on the sea for being the Chief Captain, he had the mosque built on the land reclakimed from the sea. The mosque of the complex is evaluated as a smaller version of Hagia Sophia. 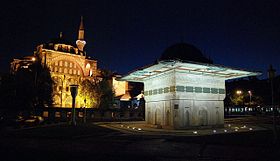 An inscription at the outer entrance of the complex is dated 988 in the Hijri (Islamic) calendar (1580 in Gregorian calendar) and has a 4-verse poem in jeli diwani calligraphic script in Ottoman Turkish by poet Ulvi and written by calligrapher Demircikulu Yusuf:

All three doors of the courtyard are ornamented. The courtyard also has a marble fountain for ablution before prayer with eight columns and a dome. The outer porch has a sloping roof supported by twelve columns on the west façade and three on each side, all with rhombus-shaped capitals. In the center is a marble portal.

At the outer courtyard in the graveyard stands an octagonal türbe with a dome also made by Mimar Sinan. It's wooden doors are inlaid with mother-of-pearl. Kılıç Ali Paşa's tomb lies inside the türbe.

The medrese, opposite the southeast corner of the mosque, is almost square. This structure might not be constructed by Mimar Sinan as it is not in the official list of his works, the Tazkirat-al-Abniya.

To the right of the mosque is the hamam, of which the construction was completed in 1583 The glass doors lead into two separate soğukluks (cool rooms) that are placed on either sides of the hararet (caldarium-hot room) which is hexagonal in plan with open bathing places in four of its six arched recesses, the other two opening to the soğukluks. Tha placement of the soğukluks and the plan of the hararet differ from the usual application carried out by Sinan in his other extant hamams.

The central dome of the mosque is 12.70 metres (41.7 ft) in diameter, carried on pendentives on granite piers and two half-domes on the Qibla axis. Towards the entrance, on two sides, there is a a two-story gallery. The dome is placed at the center with two exedrae similar to a Byzantine basilica, thus the resemblance to Hagia Sophia.

Above the prayer hall are five small domes carried on six marble columns. The tile panels placed high in the prayer hall are inscribed with ayats (verses) from the Quran. The mosque has only one minaret with one gallery. There are 247 windows including the 24 of the central dome. The mihrab is in a square projecting apse.