Historically NICAEA, town, northwestern Turkey. It lies on the eastern shore of Lake Iznik. Founded in the 4th century BC by the Macedonian king Antigonus I Monophthalmus, it was an important center in late Roman and Byzantine times (see Nicaea, councils of; Nicaea, empire of). The ancient city's Roman and Byzantine ramparts, 14,520 feet (4,426 m) in circumference, remain. The town was besieged and conquered in 1331 by the Ottoman Turks, who renamed it Iznik and built the Green Mosque (1378-91). Iznik's prosperity, which was interrupted by the competing growth of nearby Istanbul as an Ottoman center after 1453, revived in the 16th century with the introduction of faience pottery making. Iznik subsequently became famous for its magnificent tiles, but after the workshops were transferred to Istanbul c. 1700, Iznik began to decline. Its economy suffered a further blow with the construction of a major railway bypassing the town. Today Iznik is a small market town and administrative center for the surrounding district. Pop. (1980) 13,231.

in Islamic ceramics, a school of Turkish pottery making that flowered throughout the 16th and on into the 17th century. There

may have been potteries at Iznik, where there were deposits of suitable clay, as early as the 12th century, but it was not until the late 15th century that pottery making came into its own in Turkey. The chief center of production became established in the city of Iznik. Early 16th-century Iznik wares were influenced by the blue-and-white porcelain of Ming-dynasty China and by Persian wares. Iznik ware was soft and sandy, being of grayish-white clay covered with a thin, usually white slip (a mixture of clay and water). Flat dishes were the commonest shapes, but bowls, jugs, and flower vases were also made. They were painted with stylized and symmetrical designs of flowers, leaves, and fruits, along with abstract linear motifs based on these natural forms and others such as fish scales. By the mid-16th century the range of colors used in the decoration had expanded from blue and white to include turquoise, several shades of green, and purple and black. Red had become a frequently used color by the late 16th century. The quality of Iznik ware declined in the 17th century, and by 1800 manufacture had ceased.

Iznik is located on the banks of a scenic lake in the province of Bursa in the northwestern part of Anatolia. In antiquity, the town lay within the borders of the Bithynian region. According to one legend the town was established

on the return of the God Dionysus from India.
Iznik was colonized by the soldiers who escorted Alexander the Great (356-323 BC) during his conquests. When Antigonas Monophthalmus founded the city in 316 BC, there was already a settlement of the Bottiaei people there called Elikore, and Antigonas named the town Antigoneia after himself. Following the battle of Ipsus (301 BC), one of Alexander's generals, Lysimachos (360-281 BC) took the city and named it Nikaia after his wife and daughter of the Macedonian leader, Antipatros. Throughout the centuries the name Nikaia went through phonetic changes, becoming first Nicea and eventually Iznik in Turkish times.
In the course of its history from 316 BC to present day, Iznik presents a picture of a city that has undergone great cultural and architectural changes. In the true sense of the word, Iznik is an archeological and historical art laboratory of the Romans, Byzantine, Seljuk and Ottoman Turks.
Recent excavations of Iznik kilns tell us that the Ottoman ceramics in Iznik had a Seljuk background. The latest research and analysis have revealed that the white pasted hard ceramic consists of the same material as the soft porcelain used in the Ottoman 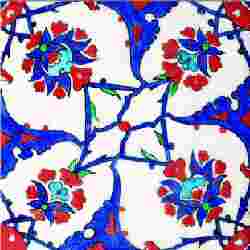 period. At first, blue and white were the prevailing colors in the pots and wall tiles in this category. During the 16th century, the Turquoise was introduced. The embossed red of the wall tiles of the mihrab of Suleymaniye Mosque (1555) marks the peak of Ottoman tiles and ceramics. During the Ottoman era, the Iznik tiles and pottery were exported to other countries via the island of Rhodes, then under Turkish rule.
A famous Turkish traveler, Evliya Celebi, mentions the existence of 300 workshops in Iznik during the l7th century. This number, also justified by the excavations, gives us an idea of the importance of tile production in this town. Various reasons have been put forward with regard to the decline of tile production in Iznik. The most widely accepted theory is that the demand from Istanbul (then Constantinople) for the use of these tiles in major public buildings such as mosques and palaces had fallen during the period of decline of the Ottoman Empire.
During the Turkish war of Independence, Iznik endured turbulent times. The town was invaded by Greeks in September 1920, and towards the final stages of the war, Iznik was burnt to the ground by the defeated invaders, forcing many inhabitants to flee. With the declaration of the Turkish Republic, Iznik became home for an influx of Turkish immigrants from Greece and Thrace.
Iznik became a center of worldwide attention once again when the year 1989 was declared the year of Iznik. Several activities relating to Iznik took place; a symposium, an international exhibition and the publication of several books. The Iznik Foundation was established in September 1993.

The Characteristics of IZNIK Tiles
Iznik Tiles are admired worldwide for the following reasons :
Iznik Tiles are made on a very clean white base with hard backs and under-glaze decorations in a unique technique.
70-80 percent of an Iznik tile is composed of quartz and quartzite. Its beauty arises from the harmonious composition of three 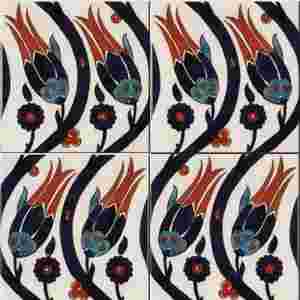 successive quartz layers and a paste-slip-glaze combination that is extremely difficult to bring together. The mixture of quartz, clay and glaze disperses in a very wide thermal spectrum at 900 centigrade. After painstaking research, the problem of the fluctuating thermal behavior of the tiles due to their quartz and rock crystal composition was solved. The result; a tile made primarily out of a semi-precious stone, quartz.
Even though it may appear to be against the principle of "ceramic textural unity", the unique structure of the tiles cause dilatation in hot, and shrinkage in cold or freezing conditions. Iznik tiles are extremely durable, and versatile for any decorative or architectural concept.
In Iznik tiles, one can observe colors resembling those of semi-precious stones such as the dark blue of lapis lazuli, the blue of turquoise, the redness of coral, and the green of emerald.
Some of the colors observed on the tiles and utensils, particularly the coral red, are very hard to obtain and apply. To obtain all of these colors, the cornea white and opaque sheen glazes are required. The slightly opaque quality of the glaze on the tiles cushions reflective light, producing a relaxing expression.
The figures on the tiles and utensils reflect allegorical and symbolic characteristics, namely the flora and fauna of the region. The geometrical designs can be interpreted cosmologically as a general description or depiction of the world or the Universe. Iznik Tiles are never overpowering or overstated, and tend towards a timeless discretion and moderation, blending beautifully with surrounding architecture.
The old masters kept their production techniques very secret, even from their own families and students. They took production secrets of their manufacture lay concealed for centuries.
Unlike current ceramic technologies, our production is fundamentally based on the natural synthesis of its various components. This intensely difficult ceramic production process is made possible through the synthesis of human labor, creativity and patience.


IZNIK Tiles Today
Iznik Kiln excavations that have been carried out for over 20 years by Archeology and history Departments of Istanbul University,

gives us clues as to the types of kilns and ceramics used in the Art of Iznik tile making.
Excavations have revealed that Iznik tile production was high on wastage owing to the large proportion of quartz in the ceramic. Therefore, only through scientific research could a unified Iznik tile concept be formed. Many experiments with the minerals in the area were carried on in the course of which thousands of experimental plates were produced only to be broken and thrown away.
Current outputs are not mere reproductions of 16th Century masterpieces. Iznik Tiles today are the continuum of the Iznik tradition and heritage after three centuries. Presently, our end product is equal or better in terms of quality.
The Iznik Foundation has received the support of scientific foundations and NGO's such as TUBITAK - MAM (Turkish Scientific Research Institute - Marmara Research Center, I.T.U. (Istanbul Technical University), I.U. (Istanbul University), in Turkey, in a vast range of analysis.
Old Iznik tiles reached their heyday in the 16th century, and the masterpieces produced at that time are regarded as the most valuable specimens in the art of ceramics by the leading museums of the world. Currently, Iznik Tiles are used as an architectural element in old and modern buildings by the discriminating decorators, architects and art lovers.

The IZNIK Foundation
The Iznik Foundation was established with the aim of introducing to the world the cultural and artistic legacy and heritage of Iznik and its environs, and is primarily concerned with the revival of the traditional art of under-glazing. The Foundation is composed of three entities : Vocational Center, Tile Ceramics Research Center and the Tile and Ceramics Factory. The liaison office is in Kurucesme, Istanbul.
The Iznik Tile is adapted to the present day without spoiling its inherent quality and aesthetic values. To this end, the Iznik Foundation is sponsoring excavations and research on the archeology and art history of Iznik. One other activity is to scan the

inventories in museums and architectural works of old Iznik tiles both in Turkey and abroad, and to establish a documentation center. Each year the Foundation prepares calendars with different tile compositions taken from historical buildings and source documents.
A second Iznik Tile Exhibition is being planned for 1999, ten years following the first one, along with an exhibition of new examples on the occasion of the celebration of the 700th anniversary of the Ottoman Empire.

The Ultimate Goal, IZNIK University
Orhan Gazi (1326-1362) is known to be the founder of the first "Medrese" (theological college) in the Ottoman Empire.
He established theological colleges in Iznik, Bursa, Akcaova, Sapanca and Izmit to which the most renowned scholars or "muderris" of the period were appointed. This led to the creation of other education centers in the Ottoman period.
The conquest of Iznik in 1331 was followed by the opening of the first medrese and the first mosque in the city. Davudu Kayseri was appointed to the position of "muderris" at the aforementioned institution in 1333. This was followed by the Suleyman Pasha Medrese, which was built before 1357 and still survives in its original state. The portico columns of the Hayrettin Pasha Medrese can be seen from the north of the Green Mosque in Bursa.
The Iznik Foundation aims at restoring the site to its former importance as a cultural center by the establishment of a university in Iznik.