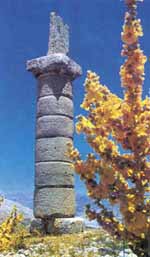 49 Km. east of Adiyaman, this artificial tumulus dates back to first 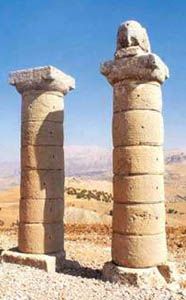 Century B.C. Around the Tumulus there are four pillars, each of which 9 m high and relies on top of them.  his 35 meter high tumulus is the funerary monument of the Commagene royal families. The tumulus is surrounded by four 9-10 meter high columns that are surmounted by large animal figures.

KARAKUS (BLACK BIRD) Going from Kahta, preferably by jeep or a similar sturdy vehicle, to the summit of Nemrut near the Kahta River, one arrives at what the local people call the Karakus Tumulus. This, according to some experts, is a small model of the Hierotheseion (last resting place) on the' summit of Mt. Nemrut. It is the burial ground for the women of the, Commagene Royal Family.  Surrounding the tumulus are four Doric columns 9 meters high. The statue that should top one column is missing. On another column there is a relief of two human figures, on the third is a statue of a lion and on the fourth an eagle. It is thought that the word Karakus, meaning’s black bird, is used because of the presence of this eagle. Each column encircling the Karakul Tumulus, with the exception of pedestals, capitals and statues, consists of six marble drums.