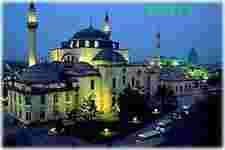 Historically ICONIUM, city, central Turkey. The city lies at an elevation of about 3,370 feet (1,027 m) on the southwest edge of the central Anatolian Plateau and is surrounded by a narrow, fertile plain. It is backed by Bozkir Mountain on the west and enclosed by the interior edges of the central Taurus ranges further south. The southwestern part of the city has been redesigned, and a wide avenue leads through the western suburbs to the railway station, but the old city still survives to the east of the acropolis.

Konya is one of the oldest urban centres in the world; excavations in Alâeddin Hill in the middle of the city indicate settlement dating from at least the 3rd millennium BC. According to a Phrygian legend of the great flood, Konya was the first city to rise after the deluge that destroyed humanity. Still another legend ascribes its ancient name to the eikon (image), or the gorgon's head, with which Perseus vanquished the native population before founding the Greek city.

After the collapse of the Hittite empire, the Phrygians established a large settlement there. It was Hellenized gradually from the 3rd century BC and became a self-governing city, largely Greek in language, education, and culture. Some of the citizens, however, retained their Phrygian culture, and it was probably among them that the Jewish community stirred up opposition to the Apostle Paul on his first visit in AD 47 or 48; he returned in 50 and 53. Iconium, included in the Roman province of Galatia by 25 BC, was raised to the status of a colony by the emperor Hadrian in AD 130 and became the capital of the province of Lycaonia about 372.

Located near the frontier, Iconium was subject to Arab incursions from the 7th to the 9th centuries. It was taken from the Byzantine Empire by the emerging Seljuq Turks in 1072 or 1081 and soon became the capital of the Seljuq sultanate of Rum. Renamed Konya, it reached its greatest prosperity under their rule and was accounted one of the most brilliant cities of the world. Its enlightened rulers were great builders and patrons of art who endowed the city with many buildings, including some of the finest existing examples of Seljuq art. Now used as museums, these include the Ince Minare (built 1258), a former theological college housing the Seljuq Museum; the richly decorated Karatay Medrese (1251), a former theological school that now houses a ceramics museum; and the Sirçali Medrese (1242), which now contains a museum of Seljuq and Ottoman antiquities. The palace of the sultans stands on the acropolis mound. Nearby are the mosque and tomb of Sultan 'Ala` ad-Din Kay-Qubad I, at whose invitation the Muslim Sufi (mystic) Jalal ad-Din ar-Rumi settled in Konya and later founded the Mawlawiyah (Mevleviye) order of mystics, known in the West as the "Whirling Dervishes." The tekke ("monastery") of Rumi, comprising a number of buildings and his mausoleum, lies south of the city centre; since 1917 it has been used as an Islamic museum.

After the decline of the Seljuqs, Konya was ruled by the Il-Khanid Mongols and later by the Turkmen principality of Karaman until it was finally annexed to the Ottoman Empire about 1467. The city was in decline during the Ottoman period but revived after 1896, largely through the building of the Istanbul-Baghdad railway, which passes through Konya. Improvements in the irrigation of the Çarsamba plain led to an increase in agricultural productivity. Until 1923 Konya was the most important city of central Anatolia, overshadowing Ankara. Present industries include a sugar-beet plant, flour mills, and carpet factories. Bauxite deposits were tapped by an aluminium-manufacturing complex established in the early 1970s. Konya is also the site of a teacher-training school; Yüksek Islam Institute, an institute of Islamic learning founded in 1962; and Selçuk University, established in 1975.

With its orchards, gardens, and monuments, modern Konya attracts a growing tourist trade. Its association with the Dervishes makes it a place of pilgrimage for Muslims. Christian monuments include the old church of Amphilochius inside the city and several shrines nearby. The city is linked by air with Ankara and by road with the principal urban centres of Turkey.

The surrounding area, consisting of plains at the base of the Taurus Mountains, has numerous oases, and irrigation schemes have further extended the amount of cultivated land. Wheat and cotton are the main crops grown on the plains. North of the city, the bare Anatolian steppe provides spring pasture and supports some dry farming. The products of the steppe include wool and livestock. Lead is also mined in the vicinity. Pop. (1990 prelim.) city, 509,208.

major Neolithic site in the Middle East, located near Konya in south-central Turkey.  It is in Cumra District

borders. Excavations (1961-65) by the British archaeologist James Mellaart have shown that Anatolia in Neolithic times was the centre of an advanced culture. The earliest building period at Çatalhüyük is tentatively dated to about 6700 BC and the latest to about 5650 BC. The inhabitants lived in rectangular mud-brick houses probably entered from roof level, presumably by a wooden ladder. In addition to a hearth and an oven, houses had platforms for sleeping, sitting, or working.

Edible grains and oil-producing seeds and nuts were extensively cultivated, and animal husbandry was probably practiced.

Excavation of the religious quarter produced a series of shrines with wall paintings of exceptional brilliance. These are of interest for their link with Upper Paleolithic art.

floor covering handwoven in or near the city of Konya, south-central Turkey, former capital of the Seljuq sultanate of Rum. The tradition of carpet weaving in Konya goes back at least to the 13th century, when the Italian traveler Marco Polo reported that the best and most beautiful carpets in the world were made in this area. Seven extant fragments of fine Konya carpets may date from that time.

The 19th-century rugs ascribed to this neighbourhood are undistinguished. One series of red, green, and yellow prayer rugs showing an arcade of three stilted arches above slender columns constitutes the latest, most debased version of the column Lâdiks, a type of prayer rug distinguished by the decorative use of an architectural motif.

"Iconium" of the Roman times is 263 kms from Ankara. The land is a wide plateau and has been continuously inhabited even extending back to the 8th millenium BC.

accommodating one of the earliest human communities. Made up of mud houses, which were entered through holes in the roofs, this site is a real place of interest where you can feel the life prevailing, many years ago. The finds from the district, including the cult figures of the famous temple and the mother goddess, together with old frescoes, are now on display in the Museum of Anatolian Civilizations in Ankara.

In the environs of Konya, there also exist sites which hold some remains from the Hittites. Ivriz is one, 168 kms east of Konya, which is one of the finest neo-Hittite reliefs in the country, representing a king and the fertility god of the time. Eflatun Pinar is another important sight, which is a monument fountain from the time of the Hittites, constituting a holy place of the period.

When the Byzantines came into power, Konya became an independent province and was given the name "Lycanoia." A Byzantine church and several rock chapels filled with beautiful frescoes can be seen in the town of Sille, 8 kms northwest of Konya, where the first rock carved monasteries of the world were built.

During the 12th and 13th centuries, the city acted as the capital of the Seljuk Turks and advanced rapidly to become a great cultural center.

The most famous building here is the Green Mausoleum of Mevlana Celaleddin Rumi, the great Turkish philosopher and poet. He is the founder of the sect of Whirling Dervishes, the seminary that was attached to the mausoleum. It has been converted into a museum housing Mevlana's works, and accoutrements related to his sect. Every year in December, ceremonies are held in Konya or the commemoration of Mevlana and the Whirling Dervishes. In this Dervish Festival, the "Sema" dance is performed by men dressed in white robes, whirling and rotating around the floor. This dance, in which the dancer with the great love of God is believed to attain divine unity, is an event well worth seeing.

On Alaeddin Hill in this region is the Alaeddin mosque and palace, which are fine 13th century monuments built during the reign of the famous Seljuk Sultan Alaeddin Keykubat.

Karatay Medresse, constructed in 1251, stands to the north of this hill, and is now a museum which holds the best examples of Seljuk tiles and ceramics. The Ince Minareli Medresse with its fascinating monumental portal, the Sircali Medresse, and the Iplikci Mosque are other Seljuk works in the city.

Beysehir, 94 kms west of Konya, was founded on the shores of Lake Beysehir, the third largest lake in the country. There are the attractive Seljuk monuments of Esrefoglu Mosque and its medresse and the Kubad-Abad Summer Palace.

Of particular interest is the town of Aksehir with its remains from the 13th century, the Ulu Mosque, the Sahip Ata Mausoleum and the Altinkale Mescid. This land, 130 km northwest of Konya, is the birthplace of the famous Turkish humorist Nasreddin Hoca, whose mausoleum is here.

The various museums, comprising rich collections of historical finds, are other interesting sights in Konya. Especially of interest is the Archaeological Museum which should be visited for its charming pieces, including the Sidemara Sarcophagus. The Koyunoglu Museum, with the Izzettin Koyunoglu House inside it, constitutes a beautiful complex; the Ethnographical Museum and Ataturk's House are also at the service of history lovers.