Kütahya is a small province in the midst of hill country, clustering about the walls of an impressive hilltop fortress. It is the hometown of the world famous Yagolbedir Carpets, and Kütahya tiles which you can see everywhere in the country. But the best and the cheapest are in Kütahya, where you may visit the workshops and see these tiles produced with designs from the 16th- and 17th-centuries. They are especially famous for their cobalt blue on a milky white background. The old wood and stucco houses of Kütahya are picturesque. The Hungarian House (Kossouth Museum) and those on the Germian Street are the most interesting ones. Kütahya is a thermal springs center with Harlek-lilca, Muratdagi-Gediz and Eynal-Simav, among the most famous . 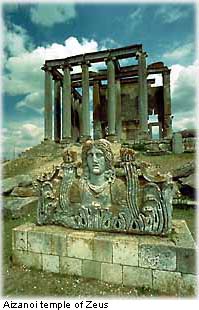 To the southwest of Kütahya an ancient city awaits you for an eccentric archaeological excursion, Cavdarhisar (Aizanoi) has one of the best preserved Roman temples in Anatolia; the Temple of Jupiter. Dating back to the time of Hadrian, it was built for the worship of Zeus and also the Anatolian fertility goddess Kybele. A Byzantine fortress, the Seljuk Hidirilk Mosque and Balikil Bath and the Ottoman Bedesten, Saadettin Mosque, Sengui Bath are just some of the important historical remains in Kütahya.

At Murat Mountain there are camping facilities including hot springs in the midst of delightful scenery.

City, western Turkey. It lies along the Porsuk River, at the foot of a hill crowned by a ruined medieval castle. Kütahya, known as Cotyaeum in antiquity, lay on the great road from the Marmara region to the Mesopotamian plains; the town flourished and declined according to the changing importance of the trade routes. As a medieval Byzantine town, it was taken by the Seljuk Turks toward the end of the 11th century. It functioned as the capital of the Germiyan Turkmen principality from 1302 to 1429 before its absorption into the Ottoman Empire. During the 16th century, Kütahya emerged as a center of the Ottoman ceramic industry, supplying tiles

and faience for mosques, churches, and other buildings in Turkey and parts of the Middle East. Its importance was eclipsed by the growth of neighboring Eskisehir at the end of the 19th century, but the development of industries at Kütahya in the mid-20th century restored some of the town's former importance. Its industries now include sugar refining, tanning, nitrate processing, pottery and carpet making, and the manufacture of smoking pipes and other articles from meerschaum (silicate of magnesium), which is extracted in the vicinity. Kütahya is linked by road and railway with Eskisehir (40 miles [65 km] northeast) and Afyon Karahisar (56 miles [90 km] southeast).

The city's old neighborhoods have traditional Ottoman houses made of wood and stucco.

The area in which Kütahya is situated contains extensive areas of level or gently sloping agricultural land culminating in high mountain ridges to the north and west. Its products include cereals, fruits, and sugar beets. Large deposits of lignite are extensively worked at Tunçbilek and Degirmisaz, and stock raising is important. Pop. (1990) city, 130,944.