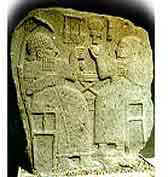 City, southern Turkey, at the edge of a fertile plain below Ahir Mountain, east-northeast of Adana. The city is near the southern outlet of three important passes through the Taurus Mountains (from Göksun, Elbistan, and Malatya).

Capital of the Hittite kingdom of Gurgum (c. 12th century BC), it was known to the 8th-century-BC conquering Assyrians as Markasi and later to the Romans as Germanicia Caesarea. The Arabs conquered it about AD 645 and used it as a base for their incursions into Asia Minor. The town, destroyed several times in the Arab-Byzantine-Armenian struggles, was rebuilt by the Umayyad caliph Mu'awiyah I (7th century) and was fortified (c. 800) by the 'Abbasid caliph Harun ar-Rashid. It was briefly occupied by the crusaders (1097) and

passed on to the Seljuq Turks in the 12th century. It was incorporated into the Ottoman Empire under Sultan Selim I in about 1515. With the surrounding province, it was occupied by France in 1919 but returned to Turkey two years later.

A medieval citadel that towers above the city contains an archaeological museum with a collection of Hittite monuments excavated nearby. The city has several mosques (notably the 15th-century Ulu Cami), medreses (religious schools), and old churches and is a centre of light industry and commerce, producing and exporting olive oil, spices, and handloomed goods. It is linked by a branch line with the Adana-Malatya railway.

Known as "Markasi" in earliest ages, this city, 78 km north of Gaziantep, stands as a site of history, having a long past filled with numerous invasions, was once the capital of Gurgum, a Hittite State in the 12thcentury BC.

There exists an archaeological museum inside the citadel, where Hittite sculptures are on display. Other important remains in the area are the Ulu Mosque and the Tats Medrese, both dating back to the 15thcentury, together with the Hatuniye and Beyazit Mosques of

This province, the original name of which was Maras, had shown such velour during the War of Independence, that it was then given the title "Kahraman", which means of "hero".

The specialty of the region is its famous icecream well, and worth trying. Carved wooden furniture, copper and brass works and handworks of glided silver thread are also treasured. Caving, hunting, fishing beside plateaus and picnicking areas are also famous.