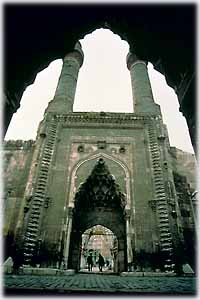 Situated at an altitude of 1275 m, Sivas is the highest city of the Central Anatolian Region, and the most mountainous one with numerous peaks. This uneven land has been the shelter of many tribes from the earliest ages to more recent periods from which remain many notable monuments.

Sivas, being at the junction point of the Persia and Baghdad caravan routes, was once a busy commercial center. During the interval between 1142 and 1171, it was the capital of the Turkish Danismend Emirs. Later, under the rule of the Seljuks, it became a cultural center with importance given to learning and scholarship. Many related buildings were constructed, the remains of some can still be seen today.

One of the outstanding numerous Seljuk works of art and architecture is Izzeddin Keykavus Sifahanesi which was "a house of recovery" in those times, in other words "a hospital". It was built in 1217 by the order of the Seljuk Sultan, and its decoration with painted tiles is beautiful.

Gok Medresse and Buruciye Medresse, both built in 1271, constitute the best examples of wonderful Seljuk artistic works, while the Ulu Mosque of the Danismend Emirate is another fine historical monument, reflecting a different style. The Cifte Minareli Medresse of the same year, is also noteworthy with its twin minarets rising elegantly on both sides of its ornate portal.

Throughout the long history of the city, the role played by Sivas during the War of Independence is important in that the National Congress took the decision to fight for the liberalization of Turkey here in 1919. The school building used then is now the Ataturk and Congress Museum with the relevant documents of the congress and war are on display, together with ethnographical finds and local handicrafts.

165 kms southeast of Sivas is the ancient town of Divrigi, which was once a Byzantine site. By the 12th and 13th centuries, it was the capital of Turkish Mengucek Emirs, and the remains of Ulu Mosque of 1229 and a citadel remain from that period. The Baroque style portal of this magnificent mosque is a real masterpiece of stonework, and this monumental building has been declared by UNESCO to be one of the eminent cultural heritages of the world.

Besides its historical treasures, the city possesses several other specialties, one of which is Balikli Kaplica, an interesting spa of the town of Kangal. It is a thermal spring, filled with tiny fish living in the hot waters, which provides a different type of cure for skin complaints. It is the only cure center in the world for "Sedef Hastaligi" (psoriasis). Soguk Cermik is another spa center. Hafik, Todurge (Zara), and Gokpinar (Gurun) Lakes are the interesting places for picnicking, boating and fishing. Another special characteristic of this town, 68 kms south of Sivas, are the world famous Kangal dogs. These sheep dogs have proven their loyalty, and success and are confidently used in the area of police work.

Sivas is also known for its fine carpets of various designs and colors. These locally produced weavings offer a wide variety of choice, and the inherent high quality is not subject to variation.

Turkey. It lies at an elevation of 4,183 feet (1,275 m) in the broad valley of the Kizil River. Although excavations at a mound known as Topraktepe indicate Hittite settlements in the locality, nothing is known of Sivas' history prior to its emergence as the Roman city of Sebastea, which became the capital of Armenia Minor under the emperor Diocletian near the end of the 3rd century. Justinian I had the city walls rebuilt and fortified in the 6th century, and under the Byzantine emperors Sebastea was a large and wealthy Anatolian city. In 1021 Sennacherib-John, the Armenian king of Vaspurakan (Van), ceded his dominions to the emperor Basil II and became the Byzantine viceroy of Sebastea. His successors served in the same position until the Turks arrived in the area in the late 11th century. The Turkmen Danishmend dynasty conquered Sebastea about 1080-90, renamed it Sivas, and made it the capital of a principality until it fell to the Seljuk sultan of Rum in 1172. Under the Seljuks, Sivas reached its greatest prosperity, becoming one of the most important cities of Anatolia; it was said to have had more than 150,000 inhabitants when it was plundered by the Central Asian ruler Timur (Tamerlane) in 1400.

Although it never regained its former prosperity, Sivas was an important provincial capital under the Ottoman Empire, and in September 1919 it served as the site of the second national congress called by Mustafa Kemal (Atatürk), later the first president of Turkey. This congress eventually led to the expulsion of the European occupying forces, the end of the Ottoman Empire, and the establishment of the republic.

Sivas contains some of the finest remains of 13th-century Seljuq architecture. Of these, the medreses (religious schools) are particularly noteworthy: the Gök (Blue) Medrese (1271), which houses the local museum; the Sifaiye Medresesi (1217-18), originally a hospital, containing the tomb of its founder, Sultan Kay-Ka`us I; and the Çifte Minare Medrese with its intricately carved facade and minarets. The oldest mosque is the Ulu Cami ("Great Mosque"), dating from the Turkmen era. Near the city is the Armenian monastery of the Holy Cross, which contains a royal throne and other relics.

In the past, Sivas owed much of its importance as a communications center to the north-south and west-east trade routes to Iraq and Iran, respectively. With the development of railways, the city gained new economic importance. It stands at the junction of several railways and highways and is linked by air with Istanbul via Ankara. The city's manufactures include cement and cotton and woolen textiles.

The surrounding region is drained by the Kizil, Kelkit, Çalti, and Tohma rivers. It is an important cereal-producing area and contains large deposits of iron ore, which are worked at Divrigi. Pop. (1990) city, 221,512.