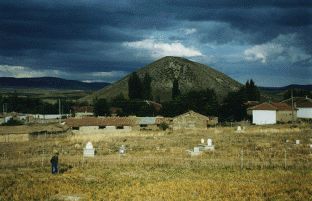 Yassihoyuk (Gordion)-capital of Phrygia.  Those with an interest in the history of the region will find a visit to Yassihoyuk (Gordion) (105 km), past Polatli on the Eskisehir highway, and Gavurkalesi (60 km/, on the Haymana Highway near to Derekoy, interesting and easily made. Gordion, a Phrygian capital, site of the Gordion Knot (the key to Asia), is today of interest for the tumulus of King Midas, of the Golden Touch and the asses ears. The remains of the old city, still being excavated can be seen; and there is a small, pleasant museum. At Gavurkalesi, there can be seen the remains of an open-air Hittite temple, a tomb, and two reliefs of Hittite gods.

The 1993 season at Gordion--the site of the former capital of the Phrygian empire and the home of the legendary King Midas of the "golden touch"--involved many activities, including excavation; conservation, restoration, and site presentation on the City Mound; architectural and conservational study of the 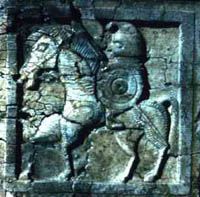 wooden tomb under the Midas Mound; geomorphological survey; geological and botanical survey; research on previously excavated materials; object conservation at Gordion; and conservation and study of wooden objects in Ankara.


Of four areas of the site investigated through excavation, the most important immediate discoveries were found in the courtyard of the Early Phrygian Citadel, at the eastern part of the City Mound. Here a second part of a structure first exposed in 1989 excavations and nicknamed the PAP ("Poros and Post") structure, and an adjacent courtyard, were excavated. The PAP structure was built near or perhaps up against the earliest Phrygian fortification wall excavated by Rodney Young in the 1960s. Although the date of the structure, which appears to have had a relatively elaborate superstructure, and its demolition remain uncertain, it precedes the eighth century citadel, and its construction may have extended into the ninth century B.C.

Dr. Richard Liebhart continued his documentation and architectural study of the great wooden tomb. With the aid of a generous grant from the Samuel H. Kress Foundation, a conference on the preservation of the tomb and wooden furniture from Gordion was organized by Dr. Elizabeth Simpson and Dr. Liebhart, and held in Ankara and at Gordion.

The major conservation project undertaken in 1993, supervised by William C.S. Remsen, AIA, Director of Architectural Conservation for Gordion, was the partial rebuilding and mortar capping of two adjacent walls belonging to an early Phrygian terrace building. The project was a pilot program to determine the techniques, materials and systems that should be used in future conservation at the site. Mr. Remsen and his firm, RAD Associates of Boston, donated his time to the project.

The summer of 1993 also saw the beginning of a Turkish fundraising program initiated by the Museum to insure the long-term support of the important work at Gordion and the preservation of the site as a national treasure of Turkey. A Gordion Foundation was formed in Turkey that not only facilitates the ability of Turkish citizens and corporations to make gifts to the project, but actively solicits financial support and otherwise promotes Gordion.